The day’s schedule will depend on the number of athletes and the number of events held,
as determined by the athletic director.
The games will start around 0900 and last until all athletes get 3 attempts at each event.

The games typically start at 0900 and proceed in order, one event at a time (in general).  It depends on the total number of registered athletes.  The stone throws are usually the first event and so on.  Typically, the caber toss is mid-day and the weight for height event competition is last on the schedule.
Checking in at the Games venue in the morning once everyone is registered and games started will define this a bit better.
It is not a time-based schedule.
The order of events may be as follows:

Athlete registration updates will be posted in May.
Inquiries should be submitted to Al Wilder, Games Coordinator, at (860) 455-3043 (cell)
or email at: maw6460@gmail.com
​

The Open/Braemar Stones are the ancient ancestors of modern-day shotputs. In the Heavy Events, the Open Stone weighs 16 lbs. (the same as a shotput) and is thrown with an approach much resembling modern shotput techniques. The box for the Open Stone is 7’ 6'' long and 4 ft. wide. The Braemar Stone is a heavier stone, generally weighing between 19-28 lbs. and, in the most ancient form of this event, the athlete must put the stone from a stationary position (no approach) behind a trig (a toe-board that cannot be crossed over or stepped on).
​
LIGHT WEIGHT FOR DISTANCE 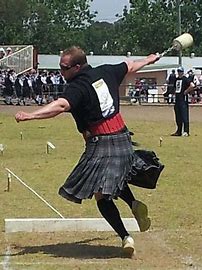 Two weights are generally thrown in this event, the 56-lb. weight and the 28-lb. weight. The overall length of these weights cannot exceed 18 inches and the athletes throw them from within a box that is 9 ft. long and 4 ft. wide. The weights are also thrown from behind a trig or toe-board that the athlete cannot step on or over.
HEAVY HAMMER 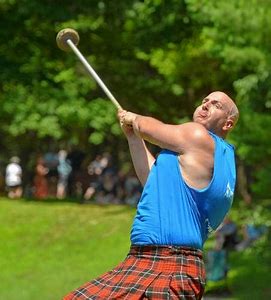 Two Hammers are traditionally thrown in the Heavy Events, a 16-lb. hammer (same as the modern Olympics hammer in weight) and a 22-lb. hammer. These events are the ancient ancestors of the modern Olympics hammer throw. Unlike the modern form of the Olympics hammer, the Scottish Hammers have a rattan handle (closer to the original Blacksmith’s hammer that was thrown) and are thrown from a stationary position behind a trig that cannot be stepped on or over as in the previous two events. Athletes generally attach a 3-to 6-inch spike on the sole of a pair of boots for this event so that they can dig their feet into the ground to provide greater stability and exert more force on the hammer.
CABER TOSS

The Caber Toss is the signature event of the Highland Games. A Caber (gaelic for “Tree”) is exactly that, the trunk of a tree which is generally 18 to 21 ft. in length and anywhere from 90 to 150 lbs. The objective of this event is for the athlete to “flip a 12 o’clock,” meaning that the athlete will “pick” the caber (by leaning down and popping the caber up into their hands), run with the caber and then attempt to flip it so that it lands perfectly straight in front of them or pointing to 12 o’clock on an imaginary clock face on the ground. Points are awarded from 9 o’clock to 3 o’clock and even if the athlete does not flip the caber, they are awarded points for how far it goes over before it falls back in degrees.
​WEIGHT OVER BAR 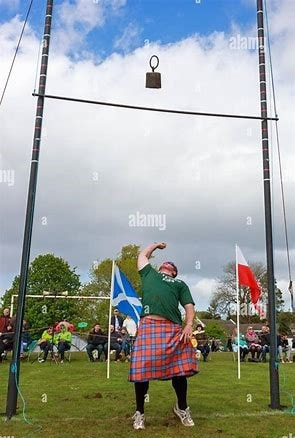 The Weight for Height, or Weight Over Bar as it is sometimes referred to is contested with either a 56-, 42-, or 28-lb. weight, depending on the age and gender of the competitor. In this event, the objective is to get the weight over a bar for height. Like the Sheaf, each competitor is given three chances at each height. If a competitor misses three consecutive times at any given height, they are eliminated from that bar height competition.